The Allegory of the Snake: Personal POWER through Change by Tonya Dawn Recla

One of the most important aspects of personal POWER development is the concept of change. Few symbols embody death and rebirth as powerfully as the snake.

I walked through the cave wondering what awaited me. I saw the eyes shining in the crevices. Bright red-orange eyes glowing from the darkness. So many of them. Hundreds or more. And yet, I felt no fear.

I continued to walk deeper into the cave knowing the symbolism, sensing it. I’d been here before in a different time, a different place, but the sense of déjà vu consumed me. Even within the vision I knew the depths of my subconscious and the journey into them. They called to me like home.

I reached the end of my path as the stone ground met water. A serene still pool of water reflecting the eyes watching my every move.

A moment passed before I saw the first sleek black body slither from the darkness. Then another and another until the entire cave filled with long black water snakes moving steadily toward me. I stood stoically with arms spread as though ready to receive them. I felt only anticipation and an overwhelming sense of welcoming.

The first snake reached my feet and slowly slithered up my body. The others followed, winding their way around me. Hundreds of snakes wrapped around my legs, my waist, my torso, my chest. I held my body still as they performed their process of entwinement. Despite all rational thoughts to the contrary it felt perfectly normal and simply…right.

At the final moments of the procession, the snakes covered my face and head, wrapping around me in a loving embrace. My subconscious sensed the significance and I no longer felt present as anything other than a witness.

In the next moment my face emerged dramatically, fangs bared, eyes red-orange. My head jutted out from the pile of snakes as I dropped to the ground gracefully. My body moved involuntarily in a slow, easy, steady, sway as I slithered  into the pool of water. 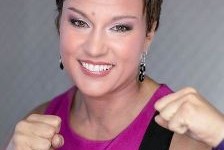 “Sheryl’s silky voice and laid-back style…she does her homework and asks intelligent questions.”

Sheryl’s silky voice and at laid-back style made a recent interview on her Journey of Possibilities show an absolute treat. I have done more than my share of radio interviews, but Sheryl’s was by far the most enjoyable experience I have had because she does her homework and asks intelligent questions.

“I’ve been interviewed probably 30 times, but you get the #1 Best Interviewer Award!”

Thank you for taking the time to interview Sandra Morse and me today. I have been interviewed probably 30 times, but you get the Number 1 Best Interviewer Award! Thank you for all you do to wake up the planet! All My Relations – Sister Jaguar

“…This is the gift that you have. Bringing forth the best in others.”

“Sheryl, you are a beautiful gift from the worlds beyond this realm, bringing forward all the possibilities that those in this world have to offer. This is a gift that you have. Bringing forward the best in others. All who watch benefit from this gift. They take away a gift of knowledge and this knowledge… Read more ““…This is the gift that you have. Bringing forth the best in others.””

“Sheryl…truly a God-send…She has a true gift for spanning that gap between left and right brain thinkers.”